The Wolseley Air Start system is a representative one of the compressed air type.

The Wolseley Air Start system is a representative one of the compressed air type. The compressed air system has the advantage in that it can be used for inflating the tyres as well as for starting. A single-stage air compressor pump is driven off the gearbox layshaft by chain belt as shown at A, Fig. 4, a diagram of the whole system. B in Fig. 4 is the reservoir; C the distributor for supplying the cylinders; E the dash-board control mechanism; D is the valve and junction box. Generally, the compressor is designed to work at 300 lb. per square inch, and the reservoir can be charged with air at this pressure during a run of ten miles, but the engine, when warm, maybe started with an air of 6o lb. pressure, although it is preferable to provide a minimum of 200 lb. pressure. When the reservoir is full at 300 lb. pressure, the supply is sufficient to start the engine fifty times.

As soon as the gauge shows that the pressure in the reservoir has attained this degree the compressor clutch on the gearbox layshaft should be disconnected, but in any case, the compressor is so designed that an abnormal pressure cannot be developed; therefore no trouble need be feared if it should be left in connection with the inflation of the tyres, even if the pressure is insufficient the compressor itself can be run directly to inflate the tyres. It will be understood, of course, that once the reservoir is charged the air can be retained for any length of period, overnight or for days. The main stop valve, which is combined with the junction box for controlling the inlet of air to the reservoir, is arranged to seal the reservoir when the car is not in use. It may be added, too, that air can be used for any other suitable purpose, notably for working a pneumatic jack to lift the car prior to the inflation of the tyres.  Turning now to the details of this air self-starter and tyre inflater, the compressor itself is illustrated in Figs. 5 and 6. It is of the two-cylinder type, driven through a clutch and enclosed silent ‘chain of the forward end of the gearbox layshaft, as shown on the plan of the chassis, and in detail in Figs. 5 and 6. The clutch is controlled by a lever on the dashboard, so that it may be thrown out of gear when the stored air in the reservoir has reached the desired pressure. The lubrication of the compressor is automatic in conjunction with the gearbox lubrication. The reservoir is of forged steel and is carried in the same way as an exhaust silencer on the underside of the frame. The distributor, which is illustrated in Figs. 8 to 11, is placed on the forward end of the engine, as shown in the end view of the engine, Fig. 7. 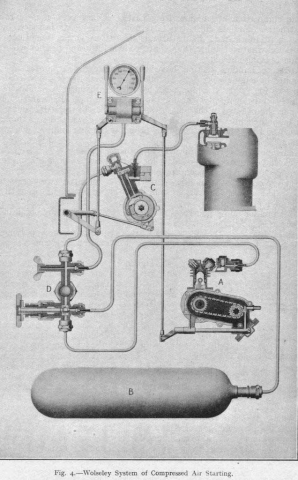 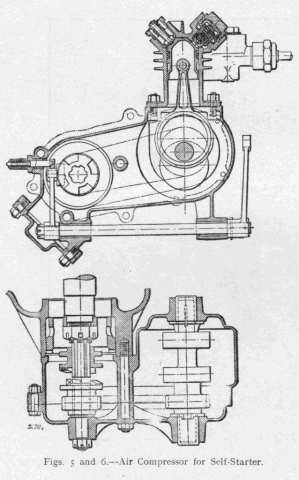 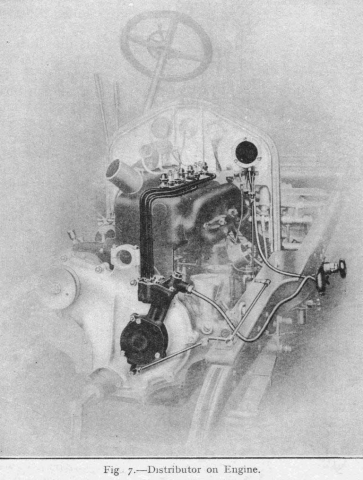 The cams of the distributor are driven by the engine camshaft, being mounted on the forward end of it. The distributor contains an air admission valve with double seal, and separate distribution valves, one for each cylinder of the engine, with the necessary pipes for communication from the central distributor to the valves on each cylinder. No parts of the distributor are in action except when the motor is being started up by compressed air. In such event, the starting lever on the dashboard throws tappet levers into position between the starting cams and the valve stems, Figs. 10 and 11, and by a combination of the same motion opens the main air admission valve to the distributor when the engine works as a compressed air motor. The change over to petrol is automatic, the air supply being cut off by the pressure of the explosions as soon as they occur. The tappet levers are moved clear of the starting valve stems and of the starting cams as soon as the engine is running on petrol. Automatic check valves are provided in the pipes leading from the distributor to each working cylinder. The control mechanism on the dashboard consists of two levers and a pressure gauge, the levers operating the starting valve and the compressor clutch respectively. The main stop valve, which is combined with a junction box, is provided on the side of the frame, so that the air reservoir may be seal when the car is not in use to ensure retaining the compressed air for long periods. The only parts that can by their failure cause any difficulty whatever with the running of the car are the check valves on the cylinders. These check valves are screwed into, the valve covers with a thread which is the same size as for sparking plug, so that, in the unlikely event of irreparable failure of the self-starter, if these valves are removed from the cylinders and ordinary sparking plugs put in their places, the car and engine will be restored to its normal state, as if no self-starter were fitted, the car is in perfect order simply minus the self-starter. 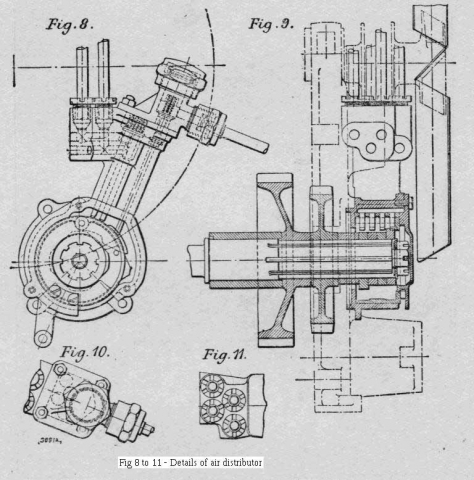 As no part of the mechanism is in operation when the control levers are in a neutral position, no contingent damage or inconvenience can arise from the failure of any part of the mechanism. As far as the actual working is concerned, the compressor may be left in gear all the time the car is running, as owing to its design it is impossible for it to compress to a greater maximum air pressure than approximately 300 lb. per square inch. The result is, when the pressure is low it puts air into the reservoir rapidly, and as the pressure rises so the rate of compressing falls. As the tank and fittings will all stand 300 lb. pressure, and each individual tank is tested to 600 lb. pressure, there is not the slightest danger of bursting. It is, however, most desirable that the compressor should be thrown out of gear when sufficient pressure is obtained to avoid unnecessary wear and tear. The pressure should always be kept up fairly high, as the engine starts better with high pressure; whilst it also ensures that there will always be sufficient air available to inflate a tyre.  It will be found that the compressor is reasonably silent up to a  pressure of 200 lb. per square inch, and beyond this the pulsation becomes increasingly noticeable as the pressure rises. Pressure should not in ordinary working be allowed to run above 250 lb. on the gauge, while 200 lb. will be found quite ample for ordinary running during the day the higher pressure being necessary only when starting from cold in winter. It will be found that a pressure of 200 to 250 lb. provides sufficient air to inflate one tyre with ample surplus for restarting. Fig. 12 is a transparency photo showing the disposition of the various parts of the system on the car. 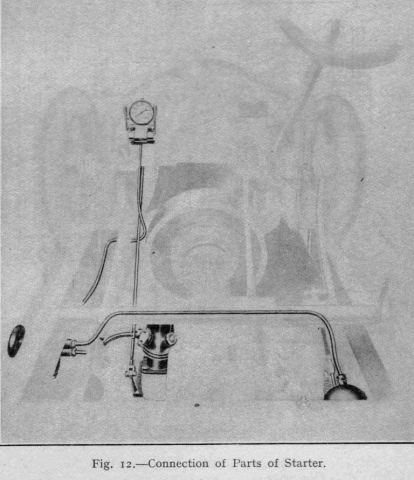 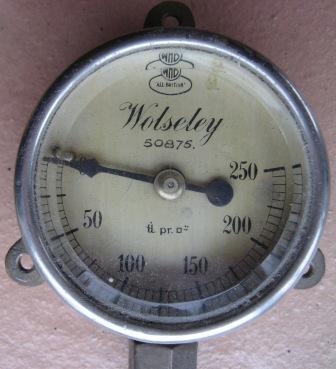