The ebb and flow of electricity has an air of mystery often to the layman.

The Wolseley Battery and Charging Systems

So, before I identify the peculiarities of some of the automobile charging systems in favour at the period our Wolseleys were produced, I shall endeavour to explain this ebb and flow mentioned. There are two main factors concerning the passage of electrical energy along a wire cable, flow and pressure. The former being the speed of the current measured in amps and the pressure is the volume or amount measured in volts. A simple analogy is water flowing through a pipe. The size of the pipe generally governs the volume of the flow whilst the pressure it is being pumped at effects the speed at which it travels through the pipe. (If water is pumped through a very small pipe at high pressure we have the basic principle of our modern-day “water blaster” used in exterior cleaning i.e. small amount of water at very high speed, the force of which does the cleaning.) When we do the same thing with electricity, we then introduce a third factor called resistance (measured in ohms) and all metal has this resistance to the flow of electricity.

Copper has a low resistance factor and so is mostly used in the manufacture of auto wiring cables. Resistance is very important to keep in mind when considering auto charging systems. Old batteries develop high resistance to accepting charge because the plates have “hardened” with age. Loose connections along the cable joint create resistance, dirty battery terminals connections also. Keep them SCRUPULOUSLY CLEAN AND TIGHT AT ALL TIMES. Make certain the battery earthing lead connection to the chassis/frame is tightened onto clean metal, no paint or dirty grease to create resistance. Check all connections for signs of excessive heat after using the starter motor 2 – 3 minutes with ignition dead. Hot spots indicate resistance at that point, severely restricting the flow of current. Sometimes, cables are too small to carry the flow (amps) required and so get warm – if this happens to the main battery/starter leads, perhaps heavier cables will make a world of difference to starter motor performance which means quicker and easier engine starts. 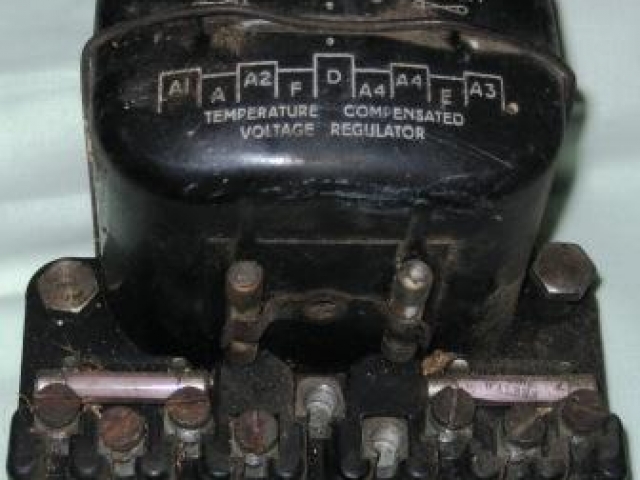 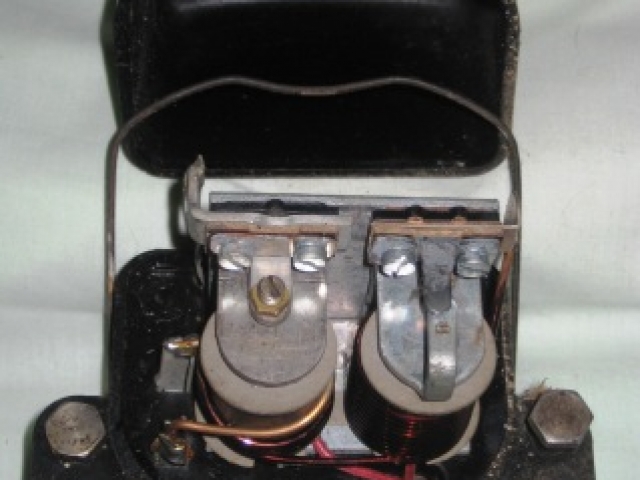 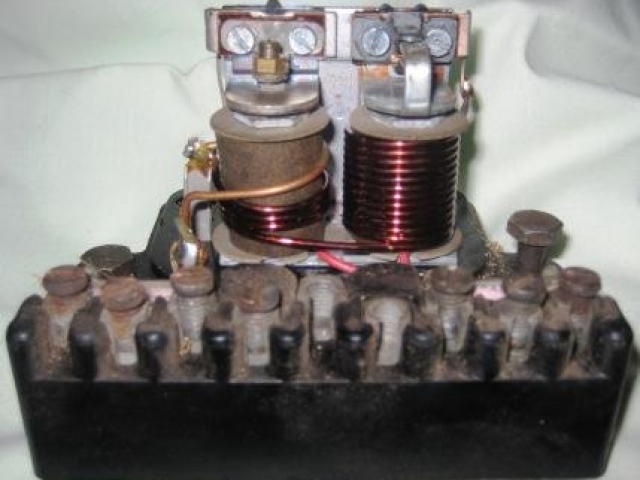 In the car charging system, it is necessary to have an “interrupter” commonly called a “Cut-out” to prevent battery current flowing back from the battery and earthing out through the generator earth brushes and discharging the battery when the engine stops. When the engine fires up, rotation of the generator provides current to energize a magnetic coil in the cut-out pulling set contacts together completing the circuit to the battery. Upon becoming stationary these spring-loaded contacts automatically open and prevent drain back. In early model cars, this was the only unit fitted in the charging system. Make sure these contacts arc not burnt and pitted to cause resistance – use a fine point file or carborundum paper to clean them up – be sure to disconnect the battery first.

During the late 30’s and early 40’s the first of the compensated voltage control units came into use this the “black box” usually mounted under the bonnet on the firewall. Lucas MCR1. MCR2, RF95, 95/3, 96, 97, RO106/1. 106/2, RB187 and RB108. Remove the cover to expose 2 “bobbins”, one is the cut-out, the second is the voltage control unit which also has a set of contacts which become pitted and burnt with use and create resistance (our old enemy) and reduces the amount of charge to the battery.

The function of the voltage unit is to regulate the generator charge rate according to the state of charge of the battery. To maintain a 6-volt battery at full charge, the regulator is set at the factory at 8 – 8.5 volts. For a 12 volt battery, the regulator setting is 16 – 16.5 volts. Cleaning and polishing the contacts is necessary after considerable use of the vehicle and the voltage setting will need to be checked with a 0.30-voltmeter on open circuit. (Place a piece of card between the cut-out points) If the reading is below that mentioned earlier I suggest you take it to your auto electrician to have it adjusted.

Later cars were fitted with 3 bobbin regulators identified as [email protected] and the later [email protected] Of the 3 bobbins 1 is the “Cut-out”, 1 is the “Voltage regulator” and the 3rd is a “current regulator”. These units are quite complicated and should only be serviced by a competent repairer, who are becoming difficult to find as the younger artisans do not have the knowledge or correct information. 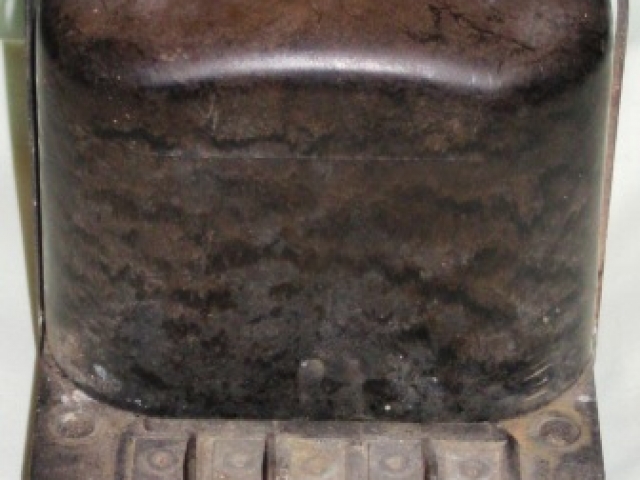 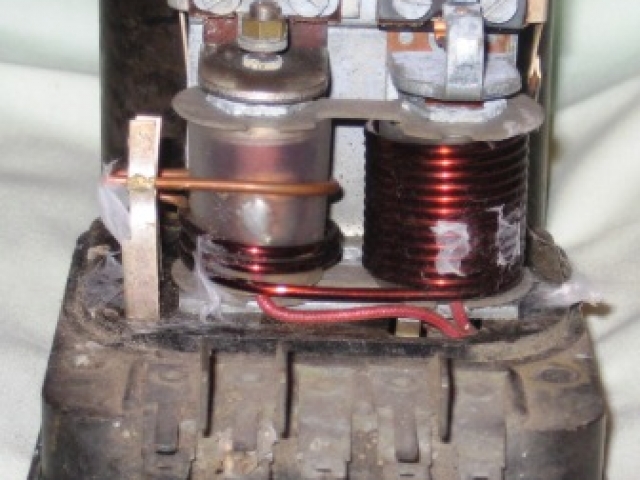 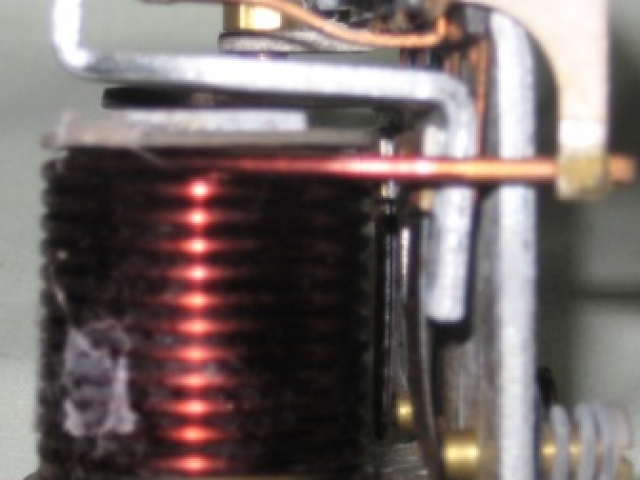 For general guidance as to whether your regulator needs an overhaul, take notice of the ammeter reading after having used some battery current operating the starter motor with the headlights on. The charge rate should go up to approximately 20 amps for at least 10 – 15 minutes before cutting back. If the rate drops after 3 minutes or less, chances are it needs points cleaning and amp and volt settings adjusted. If you fit a good battery which is fully charged to your vehicle and after 3 – 4 weeks using the car, the battery has lost charge (using the hydrometers) and is down to half charge or less is a sure indicator the regulator is tired and needs an overhaul. 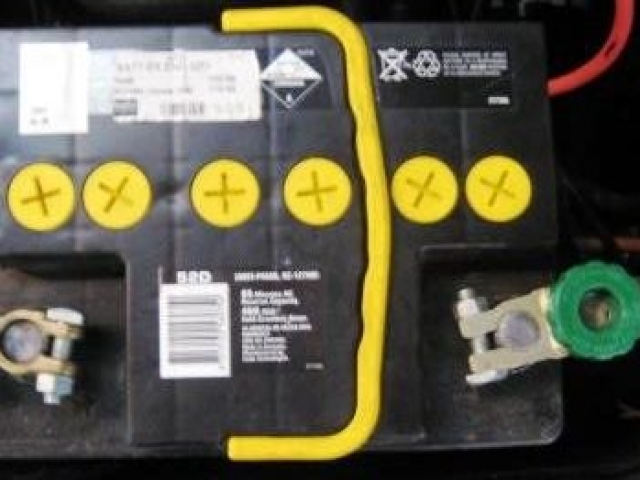 Remember- Keep your battery fully charged AT ALL TIMES

And so double or even treble the life of what is a reasonably expensive item, plus always knowing your engine will start on the coldest mornings.