It’s been a relatively quiet few months for the Christchurch branch, but things are set to kick off now that we’re well into the New Year and the more outdoor-type events through the summer.

The monthly working bee at Idlewood in October happened a week earlier than normal to allow for the VCC swap meet, which was on the same weekend we normally have the working bee. Progress was made on Mike Dickison’s Wolseley 1300, with the engine mounts being renewed and another couple of minor jobs attended to. A load of scrap metal was also assembled on a large trailer and later taken to Metalman, netting over $130. The value of scrap seems to be rising again!

Christchurch VCC Swap Meet weekend was a busy one with our usual display, followed by both the national committee meeting in the afternoon at Idlewood, and then a meal together followed by the National AGM at the Papanui RSA that evening. The meeting generated a very good turnout and some good discussion about subs and promotion of the club going forward. Thanks to everyone who came along and supported the discussion. Thanks too to the Christchurch branch members who put my name forward for a special presentation, and for the hand-made wall-plaque which I received. I feel very honoured and privileged to be part of our club and to be able to take part in something I’m passionate about. As I said at the meeting, when I’m in my shed or driving a Wolseley, I’m in my happy place. It doesn’t matter if I’m doing 20mph in one of the veterans or doing 100mph in the race car, I really enjoy being out and about in them.

Our November monthly run was a visit to the VCC gymkhana just down the road from Idlewood, where we watched a mixture of sedate and concentrated driving, to all-out wheel-spinning and drifting action around the four courses that were set out for the competitors. When the dust had settled we went down the road to Idlewood to enjoy lunch together – another perfect day to sit out in front of the clubroom and enjoy the good weather.

We also finally finished off parting-out a Wolseley 6/110 so it could be taken for scrap, and then three weeks later had a special working bee to remove the doors and subframes from a parts Wolseley 1300 body that has been in the garage at Idlewood for about 9 months now, which was also taken to the scrap-metal dealer. Interestingly, the doors off that car and a front panel cut off another spare Wolseley 1300 are right now in a container heading to the UK where a Wolseley Register member needs them for a project car over there.

Our year at Idlewood finished with the last working bee on Saturday 14th December, followed later that afternoon with our annual Christmas BBQ dinner. The morning was mostly spent having a good clean-up and tidy-up around the grounds and in the garage, so by the afternoon, we were all ready to enjoy the BBQ. We had a great turnout – over 30 people present – all enjoying a great meal and dessert together which went well into the early evening. A surprise arrival was the Wolseley 1500 of Nick and Felicity Stevenson. Nick has finally got the car roadworthy again, and boy does it look nice! It’s finished in a nice shiny deep maroon paint with a slight metal-flake in it, and cream-coloured old- school mags. There’s still a bit of finishing work that needs doing, but it’s out there and doing it now, so congratulations Nick! We understand he’s sourcing a Hornet (Mini) as his next project car.

On New Year’s Day, we took part in the (now annual) vintage and classic car gathering at the Little River domain. Once again this event didn’t disappoint – a lovely warm day with hardly any wind, the sun only making a shadowy appearance through the Australian bushfire smoke – glowing like a 20-watt light-bulb in the sky.

There were well over 200 cars present from Model T Fords right through to a very new Ferrari, and people were circulating around the domain all day just chatting to other owners and friends, and enjoying picnics and the brass band playing in the corner. 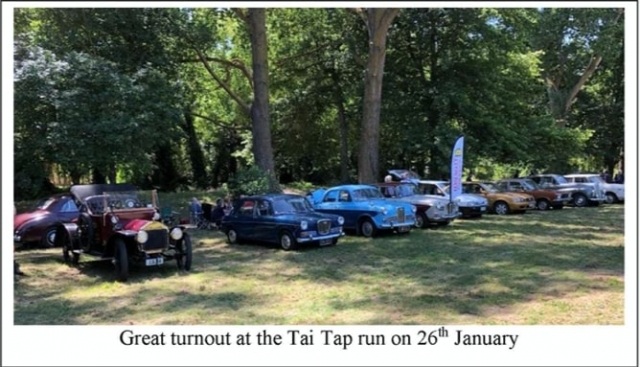 There was a huge turnout from the Triumph and MG clubs in particular. This event is getting bigger every year, and interestingly, is almost completely absent of custom cars and resto-rods seen at most other car shows around the province.
On Sunday 26th January we had a run out to Tai Tapu Domain, meeting there with members from the Model A Ford Club and the Veteran Run organised by the VCC. We had a great turnout of 14 cars and 25 people just from our own club and enjoyed a picnic under the shade of the trees on a hot and sunny day.

On Waitangi day a few of us took part in the annual Rangiora RSA run to Loburn, Although not Wolseley-related, we have to say how impressed we are with Wolseley member Danny O’Malley’s efforts in 3 car shows towards the end of last year. He won an award for his FJ Holden at the All Australian Day, and two weeks later won the best 1950’s category at the All American Day with the 1959 Cadillac.

The same car went on to win best in the show at the New Brighton Rock’n’wheels event on 9th November. A very good effort indeed, and it’s plain to see that he knows how to make a good car better and that all those shiny parts he’s always looking for at swap meets do indeed make his cars better still. However, just to prove that he’s not completely into award-winning cars, he and Sharon did turn up to the RSA run in a very nice and bright Skoda 110, even if they did head home early when news of the possibility of a hail-storm did the rounds. Seems Danny was worried that the thickness of its metal bodywork might leave it a bit more vulnerable to damage than the Holden or Cadillac.

Congratulations to Ray and Wendy Willoughby who celebrated their 60th Wedding anniversary in December, and to our queen of Idlewood hospitality, Nancy Bishop, who recently celebrated her 80th birthday. Well done to all three of you!

We’ve also just learned that Anthony Dacre has been having another rough spell lately, spending much of the Christmas break in the hospital with a bad infection that started in his arm. It’s been one thing after another for him in 2019, so Anthony, we wish you all the very best. It was great to see you at Tai Tapu, and we hope you can get out and behind the wheel of some of your lovely classic cars often this year.