Nobody questioned the authenticity of the winning hard luck story at the first national rally of the Wolseley Car Club in Nelson at the weekend. Many of the visitors in the 20 competing cars were witness to the fact. Shortly after the gleaming cavalcade arrived at the pottery at Neudorf on Saturday afternoon to see a display of the craft a free-ranging Billy goat began to take an interest in the proceedings. He caught sight of his reflection in the polished paintwork of Colin Miles’ Wolseley and immediately went on the attack. 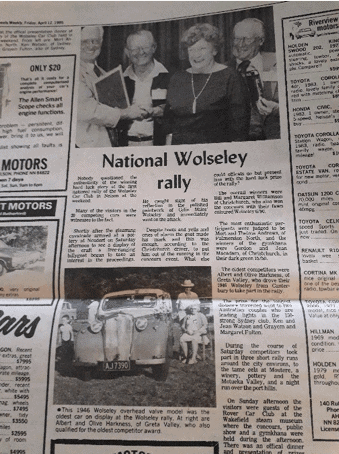 Despite hoots and yells and cries of alarm, the goat made his mark and this was enough according to the Christchurch driver, to put him out of the running in the concourse event. What else could officials do but present him with the hard-luck prize of the rally.

The overall winners were Bill and Margaret Williamson of Christchurch, who also won the concours with their fawn-coloured Wolseley 6/90.

The most enthusiastic participants were judges to be Mort and Thelma Andrews of Palmerston North, and the winners of the gymkhana were Gordon and Jean Macadam of Christchurch in their dark green 15/50.

The oldest competitors were Albert and Olive Harkness of Greta Valley, who drove their 1946 Wolseley from Canterbury to take part in the rally. The prize for the longest distance travelled went to two Australian couples who are leading lights in the 150 strong Sydney club, Ken and Jean Watson and Grayem and Margaret Fulton.

During the course of the Saturday, competitors took part in three short rally runs around the city environs, to the tame eels at Moutere, a winery, pottery and the Motueka Valley, and a night run over the Port Hills.

On Sunday afternoon the visitors were guests of the Rover Car Club at the Wakefield Steam Museum, where the Concours, public show and gymkhana were held during the afternoon. There was an official dinner and presentation of prizes that evening. 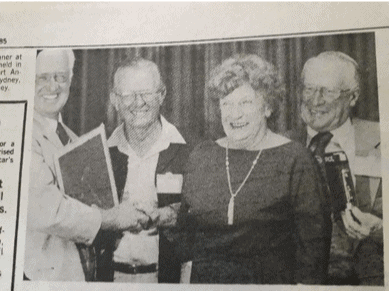 1Smiles and prizes at the official presentation dinner at the first national rally of the Wolseley Car Club held in Nelson over Easter weekend. From left are- Mort Andrews of Palmerston North, Ken Watson of Sydney, Thelma Andrews and Grayem Fulton also from Sydney. 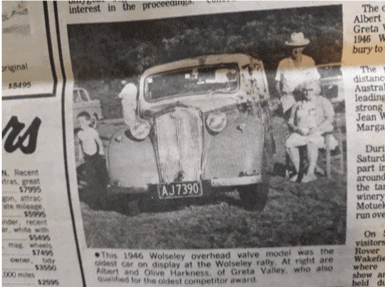 This 1946 Wolseley overhead-valve model was the oldest car on display at the Wolseley Rally. At right are Albert and Olive Harkness of Greta Valley, who also qualified for the oldest competitor award.